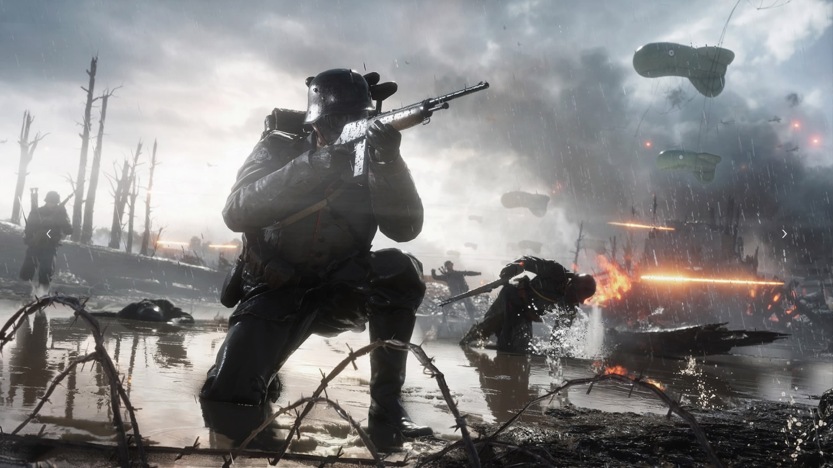 On October 1, 2016 EA will publish the DICE Developed First Person Shooter Battlefield 1. I would imagine there is a very large player base out there waiting with drooling mouths to sink endless hours into this game, especially the Player verses Player mode. I am not one of them. This Beta was my first venture into the Battlefield universe and I was not impressed. Yes, I understand it’s currently only in the Beta state but DICE has about a month to fix some issues and I don’t think they can do it.

First off let me start by saying this game looks amazing. There’s so much detail put into the scenery that I would sometimes go prone just to count the grains of sand. The game is beautifully designed graphically. And the weather mechanic is so real I have to wear goggles when the sandstorm rolls in.

The maps are huge but they aren’t balanced. In the Conquest mode there are 5 capture points at the top of the map and one down near the bottom. This design needs to be changed as it creates chaos and a death avenue instead of converging on points with strategy. The maps are huge so DICE should spread out the points and make the ground gained earned. The Rush game mode felt a little more balanced. You could either defend points or attack points. The fighting seemed constant yet not overbearing.  My only complaint was that if I was playing solo and not with a squad of friends I typically spawned so far out in the desert that I spent more time walking than fighting. I would be nice to be able to spawn a little closer to the action. I’m sure this is an easy fix but why didn’t the developers see this before the Beta dropped? It would be nice to see the entire map utilized. Besides these next few sentences I won’t mention the glitches in the game. If you want to see the glitches you can go to YouTube and watch them there. Hopefully most of them will be addressed before October.

Okay, I lied. I’ll mention a few more glitches. I stopped writing to play the Beta again and I died a few times because the enemy player disappeared in front of me; maybe lagged out, then reappeared and killed me. Also, the players on horseback, you don’t see them charge yet when the kill cam comes in to highlight them they’re halfway across the map already. Hopefully this is addressed before Battlefield 1 is released.

For being a World War 1 game there isn’t much strategy involved here. The weapons and gameplay appear to be modernized to meet the short attention span of today’s youth and society. I was hoping for bare minimum weapons. Less tanks and planes please. There’s no way a vehicle from the WWI Era went speeding through a desert landscape. It would hit 15 mph at best. The melee kills are brutal and bloody and add an intimacy similar to that of The Last of Us gameplay.

Battlefield™ 1 Open Beta: The calm before the storm.

Battlefield™ 1 Open Beta: These are the Days of Our Lives 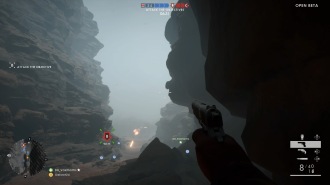 Battlefield™ 1 Open Beta: You want to go through the canyon. 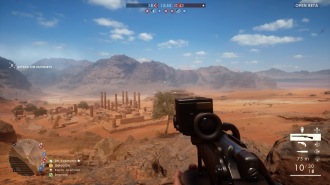 Some of my favorite FPS gaming memories were experienced in Betas, more specifically the Destiny Beta. Battlefield 1 can be fun with friends but the shooting seems a bit off. It’s as though the hit box on the enemy is very small but my hit box is as large as the map. The shooting could use some fine tuning. The shooting wasn’t bad but it wasn’t good either. Bungie did an absolutely amazing job with the shooting in Destiny that I have yet to see any developer come close. Blizzard missed its mark with Overwatch creating such a large hit box and adding a heaping spoonful of aim assist. Battlefield 1 falls somewhere in between these two comparisons. Also, it would have been nice for DICE and EA to include an introductory mission or two so that we the players can get a better idea of the game being delivered. Bungie did this with Destiny and I’m sure that if EA and DICE did that with Battlefield 1 it would create the opportunity for memories which would in turn create more sales.

Battlefield 1 might end up being a good game but based on what I was able to play in the Beta I won’t spend my hard-earned money on purchasing it. Had I been able to play a hand full of campaign missions I might be more willing to send EA and DICE my extra funds. Bungie did this with Destiny and look where that game is 3 years later. Also, Destiny: Rise of Iron will be released before Battlefield 1 so EA has some stiff competition. There’s also no real benefit to play the Battlefield 1 Beta as all progress will be reset. Yes, I’m aware that the purpose of the Beta is to help make the game better. But shouldn’t we ask for more from our Developers? I think so. EA will give you a Beta Dog Tag if you reach Level 15 and complete 4 Missions in the Beta. Whoopty freakin’ do! Epic Games is currently running their Beta for Paragon, a MOBA, and guess what? Epic Games is providing new characters every 3 weeks and you can keep your progress and anything you’ve purchased. How about that? A developer that cares for their game and their community. Maybe I’m still on cloud nine from the Paragon Beta and the Destiny Beta but Battlefield left me wanting. It didn’t meet my expectations as I had heard several great things about Battlefield games.