On November 29, 2016 Square Enix published Final Fantasy XV for both the PS4 and XBox One. I must admit that it has been some time since I plunked myself down on the couch and hunkered down for the type of epic awesomeness that comes with a Final Fantasy game. The last game in the series I played was Final Fantasy XII. I also played Final Fantasy XIV and continue to do so on free weekends and months since it’s a subscription based game. Final Fantasy XV looks and feels different from its predecessors. One of the first screens you’ll see in Final Fantasy XV reads “For Fans and First-Timers”, let’s find out if that holds true.

So far my experience with the story is an uneven crawl. I expect games in the Final Fantasy series to release plot points bit by bit as I progress through the Chapters/Missions and for the most part this is what Final Fantasy XV does. But something just feels off. I remember being able to complete the tutorial/training and when the first major plot point is revealed I could go out into the world and start grinding levels. But now instead of hours long training the basic training is completed in around 20-30 minutes and then my level grinding is somewhat halted as I’m forced to make my way through the story line. It feels very linear and not like previous Final Fantasy games.

Final Fantasy XV isn’t the traditional turned based RPG this time around. It’s more of an action based combo game (think Devil May Cry) wrapped inside a MMO world and sold to us as a RPG. In the Final Fantasy games that we grew up with, the ones we all know and love, fights were typically handled with the turn based system. Our bar would build up over time for our character and once the bar filled we were able to select which move/ability we would use. This method would continue as we cycled our way through our group. But in Final Fantasy XV we can get right into the action. This is both good and bad.

As Noctis we have a few options to go into battle with. We have our standard sword, an element (Fire, Ice, Lightening) of our choosing and we can equip the weapons of our ancestors. Noctis has a bag of tricks up his sleeve. He’s the only member in the party that has the ability to ‘warp’ or ‘blink’. You target (hold R1) your enemy then press triangle. This initiates the animation of Noctis throwing his sword to the targeted enemy and right before it hits your teleport (warp or blink) to the enemy. The farther away Noctis is from the target the more damage is done.

You can capitalize on the damage applied if you catch the enemy unaware on its ‘Blind Side’ with a ‘Warp-Strike’ and then combo these attacks in with a ‘Link-Strike.’ A ‘Link-Strike’ is an attack that allows your friends Gladiolus, Ignis or Promto to help in the attack. All of this sounds great and the execution of the animations and effects is spectacular to watch but sometimes it breaks the rhythm you’re building. The camera angle can also break your rhythm, especially when you’re in a heavily wooded or shrub filled area. You miss out on some of the action until the camera readjusts or until you make your way out of that particular area. All in all the action-based RPG that is Final Fantasy XV is fun and exciting and works well with Noctis and his crew even if it doesn’t quite fit the series.

It’s been some time since I’ve played a game in the Final Fantasy series, I don’t count Final Fantasy XIV since it’s an MMO, but holy hell when did developers think that more was better?  Minigames in the Final Fantasy series were cute little treasures that you didn’t mind spending countless hours playing. In Final Fantasy XV mini games have been replaced with ‘Skills’ (at least as far as I have discovered, I’m 10 hours in working my way through Chapter 3). The ‘skills’ include fishing (Noctis), cooking (Ignis), photography (Prompto) and scavenging (Gladiolus). The worst part about these ‘skills’ is that for everyone except Noctis they are passive. That means your entire parties ‘skills’ improve as you play through the game. You have to actively fish in order to increase your ‘skill’ as Noctis. This wouldn’t be a problem if the fishing mechanic was fun like it was in The Legend of Zelda games. I mentioned Final Fantasy XIV earlier because in this game it was imperative to pick a skill and increase its level in order for you to get the most out of your gaming experience. I don’t see that happening here. The more I continue to play the more Final Fantasy XV feels like a lot of other games but packaged as a Final Fantasy game.

Keeping with the theme of Final Fantasy XV not feeling like a Final Fantasy game, it doesn’t look like one either. Not really. Visually the game is stunning and breath-taking at moments. But the environment, to me at least, was always something that didn’t matter so much as the character design. In Final Fantasy XV we are dealing with a Japanese version of the T.V. Show ‘Entourage’. I had read that the Director and developer wanted to go with a more ‘real world’ approach with the character designs and looks. This falls flat and takes away any of the Final Fantasy charm and magic of previous games.

FINAL FANTASY XV: A Light in the Sky 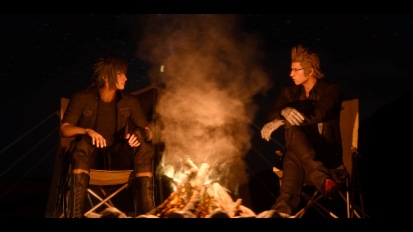 FINAL FANTASY XV: The Fast and the Furious 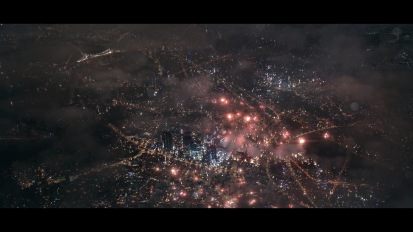 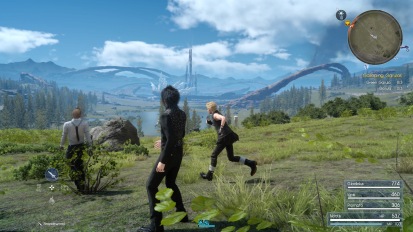 Also missing from previous games is the amount of enemies to fight. What I mean by this is that in previous games you could travel the open world to fight and grind out levels and you were guaranteed to run into any number different enemies. In Final Fantasy XV it seems that a majority of the enemies in the open world are these skeletal dog like creatures. Once again this makes the game feel less like a Final Fantasy game and more like Devil May Cry or a Resident Evil game.

Final Fantasy XV isn’t the game that I thought it would be. It isn’t the game I hoped it would be. I don’t even think it’s the game that’s “For Fans and First-Timers.” And this makes me sad. Square Enix took some great mechanics from other games and then stepped outside of the typically Final Fantasy box. They replaced Turn-Based combat with Action-based combat. Magic and Spells barely exist in this game. They took the large open worlds of MMO games or sand-box type games and wrapped it all up under the title Final Fantasy XV. Sure some of these mechanics work well, even great at times, but the magic that is Final Fantasy seems to be missing.

And as far as first timers go, I can see Final Fantasy XV being a game they get behind. I mean the video game community tend to get behind fast paced linear games like Devil May Cry or God of War. And they should, those are great games, some of the best in my opinion. But their mechanics don’t belong in the realm of Final Fantasy. Neither does the linear story line or sand-box type quest system. Yes, quests belong in Final Fantasy XV but not in the manner in which they were delivered. Often I would speak to the local ‘tipster’ and pick up sides quests only to have it suggested that “You should” or “You need” to continue on with the story. It seems as though Square Enix was trying to be everything to everyone when all they needed to do was stick to the same formula.  All of this makes me sad because I was looking forward to the long slow grind that I associate Final Fantasy games with. I guess I’ll have to wait until Final Fantasy XVI is released. Or I can play Final Fantasy Brave Exvius since it’s a Final Fantasy game that is more in line with what I would expect. It’s sad that a mobile game can be more than a major release console video game. I expect more Square Enix.