On December 6, 2016 Star Wars Battlefront had its fourth release of DLC, Rogue One: Scarif.  It’s been quite some time since I’ve set foot on any planet in the Star Wars universe but I was happy to be back with Rogue One: Scarif. I immediately logged in and jumped right into a match. And how was I greeted? I was greeted by the cold depths of outer space and a fleet of Imperial Star Destroyers. Infiltration is the first part of the new multiplayer DLC where you either have to defend the gate down to the planet or where you have to escort a ship through the gate. 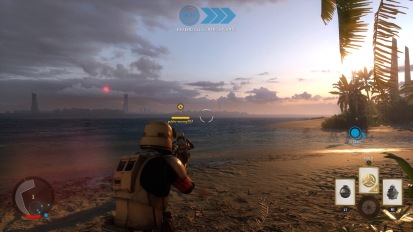 If you’re a fan of Star Wars, Star Wars Battlefront is a must have. If you’re a fan of free games now’s your chance to play any of the Season Pass content for free. That’s right Christmas weekend you can play any of the content from the Season Pass for free. Go check it out, it’s worth it. If you’ve always wanted to pick up Star Wars Battlefront there’s no better time than right now as you could probably find it for around $20. The Season Pass is $30 but even combined that’s still cheaper than the game on its original release date. Go pick it up and “May the Force be with You.”

2 thoughts on “Battlefront: Rogue One DLC”