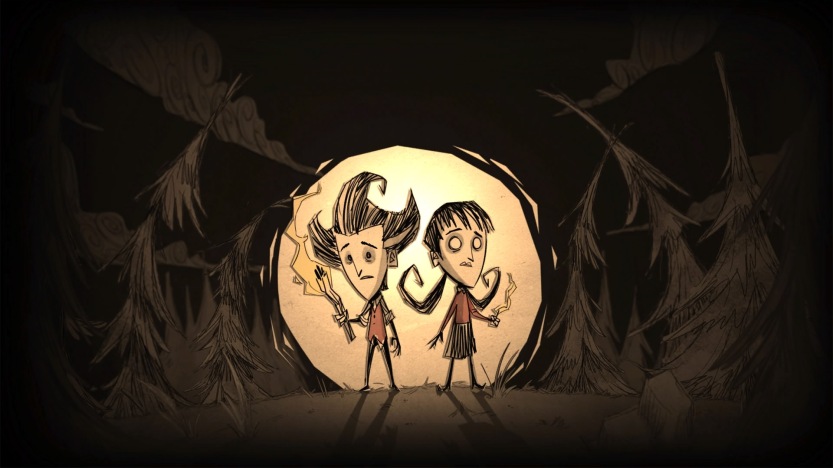 On September 13, 2016, Klei Entertainment’s Don’t Starve Together finally made its way to the PS4. I’ve been waiting for this game since the release of the PS4. I remember when the PS4 was first released and there really wasn’t much to play as far as big studio, AAA titles but there was Resogun and Don’t Starve. And wouldn’t you know it, here we are three years later and those games are still on my system and still played to this day. Don’t Starve holds a very special place in my heart: A place filled with love, frustration and anguish. All because of my son (he was 4 at the time). He played my game and died (this is where frustration and anguish come in) while I was on my 135th day. I asked him why he played my game and he said, “Because I wanted to play you Daddy.” (And there’s the love, pull at my heart-strings, oh the feels) And I responded, “I know buddy but we can’t play…Together.”

Don’t Starve Together brings us, you guessed it, the ability to play Split Screen with a close friend or family member. You know, like old school console gaming where the two of you would sit in front of the TV and laugh while smacking the controller out of each other’s hands. Luckily, to everyone’s benefit you’re not smacking the controllers out of your hands, but rooting for their survival. As soon as I could, I queued up Don’t Starve Together and sat down to play with my son. We had a blast gathering materials and building our tools, equipment and building up our fort. This was time well spent for multiple reasons. I have two complaints, though, and the first one is more to do with Sony than Don’t Starve Together. While playing split screen the second player requires a PSN Account. My second complaint is that if the second player decided to leave the game we both get kicked from the instance. I don’t like this at all. Hopefully this can and will be addressed in a future patch or update. 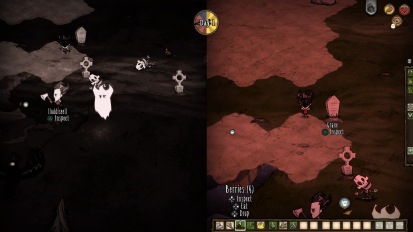 Don’t Starve Together: I died so that he may live. 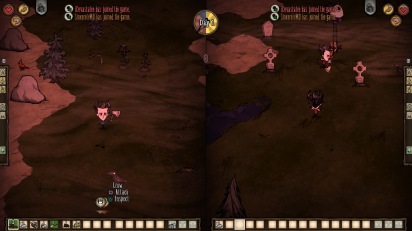 Don’t Starve Together also allows you to host or join an online instance where up to 6 players can work together to survive. Should you choose to host you have the option to leave your lobby open which would allow any player to join you. This is great if players join and help out but you do run the risk of having players join only to sabotage your hard work. Thankfully Klei thought about this and incorporated the ability to lock your lobby. If you lock your lobby any player wishing to join you has to send a request for a password and you have the finally say if they can play or not. Well done Klei! If the host chooses to leave the instance, you guessed it, you get kicked. I would really like to see Klei address this with a Host Migration patch of some sort. 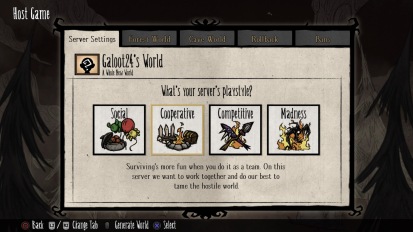 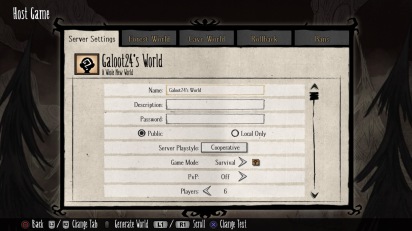 Don’t Starve Together: Additional settings for your server
Don’t Starve: Together brings us all of the whimsical charm and playability of Don’t Starve with the inclusion of the gigantic terror of Reign of Giants. (In case you were wondering that last sentence holds this blogs record for most uses of the word ‘of’ in a single sentence. Thanks for going back and counting. Wink!) Hopefully Shipwrecked, Klei’s nautical themed expansion, will be incorporated into Don’t Starve Together in the near future. Don’t Starve Together offers plenty of options for gameplay; Social, Survival, Competitive and Madness. There’s really something for every Wilson out there. There’s plenty of replay value as you unlock new characters as your progress. Something new, at least to me, is the ability to customize your character. This is a great creative fun way to prolong life of this game. On the PSN Store Don’t Starve can be purchased for $15 and Dont’ Starve Together only costs $10. It would have been nice if Klei figured a way to incorporate Don’t Starve Together with the existing Don’t Starve game that I’ve already paid for but I won’t fault them for it as $25 is still a great deal. This is a great gaming experience alone but it’s even better…Together.

4 thoughts on “Don’t Starve Together”