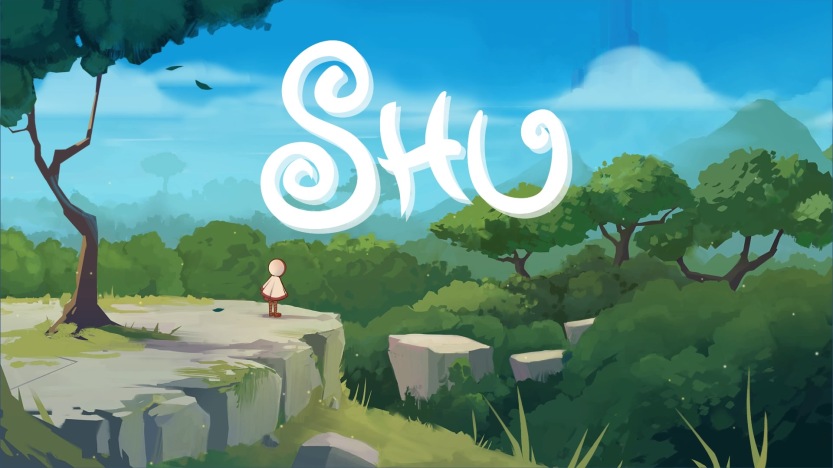 An old frail wise man sits upon a high cliff side. He appears to be meditating. His apprentice or grandchild approaches him. The child has a look of concern on his face. The wind rises as though it is trying to escape an impending doom. The child, still concerned, expresses fear as he looks over the old man’s shoulders. A dark ominous cloud is approaching. The old man motions for the child to run. Across a bridge the people of the town look on in horror. The child is torn between wanting to save or help the old man and running away to safety. The child starts to run but becomes paralyzed by shock. Standing motionless on the bridge the child witnesses the old man try and ultimately fail to prevent the dark cloud from consuming him. As the cliff side is destroyed the bridge breaks and falls into the sea, taking the child with it in its decent. The dark cloud rolls on to overtake the town. The screen goes black. The child awakens on land and so our adventure begins.

Shu is a whimsical platformer brought to us by the developer Coatsink. It was released on the PlayStation 4 on October 4, 2016 for the reasonable price of $11.99. Immediately I’m drawn to the art style presented in Shu and I can’t help but to think of another Platformer you might of heard of, Rayman. The background and level design are beautifully rendered, whether it be a Oceanside Villa or a lush Jungle, the backgrounds do not disappoint my eyes. I could have sworn on one of the Jungle levels I heard Bob Ross himself express his love for “Happy Little Trees.” And what a wonderful game this would have been if only Coatsink could have applied this Bob Ross type charm to the character design as well.

Shu; the main character, is some sort of cell-shaded  cartoon kid drawing. The contrast of cartoony characters over a lush oil painted type 3-D background worked great in games like; cough, cough, Rayman, but here it falls flat. And it doesn’t get much better when the levels introduce new “support” characters that Shu discovers and rescues from the dangers of the dark ominous cloud. These “support” characters look like some obscure Popeye villains drawn in the style of The Ren & Stimpy cartoon. It doesn’t work for me. Any charm that was gained with the background was lost with the poor character design. Typically when I’ve seen this level of contrast in background design and character design there’s a third factor to pull it all together; i.e., the soundtrack.

The soundtrack for Shu leans towards the whimsical side of the games design. The soundtrack reminded me of the type of music you would hear playing in a meditation room (not that I have ever done meditation) but this is the place the music brought me. It sounds like it could be influenced by ancient Japanese styles (again I don’t know a thing about ancient Japanese music this is the place my mind went when listening to the soundtrack.) This type of soundtrack adds additional depth to the world rendered in the background but unfortunately  throughout the game play it tends to disappear. At some points I couldn’t even hear it. The entire aesthetic for Shu is hit and miss for me. Any good to great platformer needs to have more hits than misses. That’s right, stick that landing like Kerri Strug in the 1996 Women’s Olympic Gymnastics Team.

The gameplay in  Shu isn’t as tight and responsive as one would hope or expect from a twitch reflex type platformer. Making my way through the level isn’t as fun or engrossing as I would have hoped. The level designs are very basic and tend to only get interesting when you come across/rescue someone from your town. The rescued townsfolk act as “support” characters that grant you additional abilities. Shu has the ability to jump and glide through levels. With the “help” of the townsfolk Shu gains the following additional abilities: smash through floors, jump off of walls Parkour style,  run across water, control pulleys, make flowers grow to use as platforms and a few other abilities. These abilities are under-utilized. These abilities can only be used when the character that grants them is with you. And as soon as they’re introduced you’re only given a level or two to use them before you progress to the next stage. Occasionally the next stage would involve a “panic mode” or “sprint” mode where you must progress through the level without making any mistakes because the dark ominous cloud would appear. This mechanic wasn’t executed as best as it should have been. Sometimes the controls wouldn’t respond (I have and use brand new controllers) as you would hope or expect. This mode requires no mistakes but doesn’t grant you any leniency. It takes several tries to escape the cloud. This is a cloud that even Eeyore would avoid.

Shu initially captured my interest but that interest quickly waned after a playing a few levels. Knowing I needed to be fair and unbiased I decided to give Shu a few hours of my time. After unlocking a few more stages and “acquiring” a few more abilities I still came away with the same opinion that Shu, while a somewhat decent game for the price doesn’t really offer anything new, fun or inovative. You could purchase Rayman Legends a download for the PS4 for $30, a Pre-Owned copy for $24.99 or a Pre-Owned copy on the PS Vita for $17.99. This is far more bang for your buck and more importantly it’s a more rewarding gaming experience.  I always say that you should never judge another man until you’ve walked in his Shu. If the Shu doesn’t fit you must rage quit. And finally, Shu fly don’t bother me.

One thought on “SHU: The Review”