On October 25, 2016 the Magnetic Realms developed side-scrolling exploration driven Sci-Fi platfomer Exile’s End was released. I have to admit, it looked interesting. The purchase price of $9.99 was just right, not too much to scare me away but just enough to make me think this might be worth my money. After downloading Exile’s End I immediately started the game and was greeted with classic 16-bit style graphics and sweet delicious 16-bit music. The soundtrack automatically whisked me away to my childhood where I spent countless hours playing Nintendo games like; Legend of Zelda, Metroid, Contra, Castlevania and a not too familiar game called Solstice. This goes without saying but I’ll say it anyway, “I’m excited!” 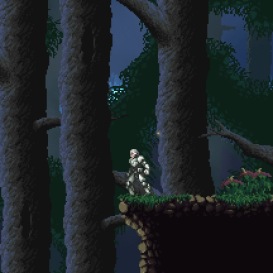 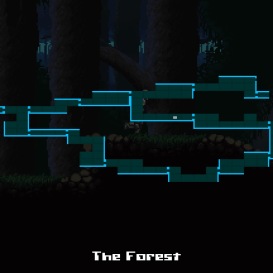 Exile’s End starts off with a great Sci-Fi cut scene that introduces us to the Captain and his crew. They’re on a mission to locate a spaceship that they haven’t heard from in 20 days. While the Captain is debriefing the crew an alarm sounds.  Your spaceship is under attack. The Captain orders his crew to the escape pods and just as the escape pods launch your ship explodes in half. The escape pods lose their bearing and plummet to the planet below. You survive your crash landing with minimal health, minimal suit life and nothing else. From here on out it’s up to you to discover and solve the puzzles of this alien planet. Most of my first hour I spent exploring the world’s stages trying to figure out where I need to go. You will encounter enemies but they are easily avoidable. The Forest, the first area you encounter, is mild and focuses on exploration and platforming. Along the way I picked up 3 rocks which I could then throw at enemies. If I missed I could still pick up my rock. This is a survival game of sorts as much as it’s a side-scrolling Sci-Fi action adventure platform.

Exile’s End offers two modes of game play; Story and Survival. Story is the main game, explore, platform and fight your way through the alien planet while discovering what happened to your crew. Survival is a timed arena event that allows you to go all out with a full arsenal against the alien lifeforms. Survival is a nice break from the slower paced story mode. You’ll also find and “Online” option on the Main Menu, this allows you to post your game completion times. It’s a nice addition even if it’s purely for bragging rights. Overall Exile’s End was an enjoyable experience that brought back some nostalgic memories of similar games from my childhood. I think the $9.99 price tag is a reasonable price for the game offered. Exile’s End brought back that lost frustrating feeling of “I ran through the entire map twice and I still don’t know where to go so I before run through it a few more times.” Kids these day won’t be able to appreciate this feelings but Exile’s End is a great game to teach them.